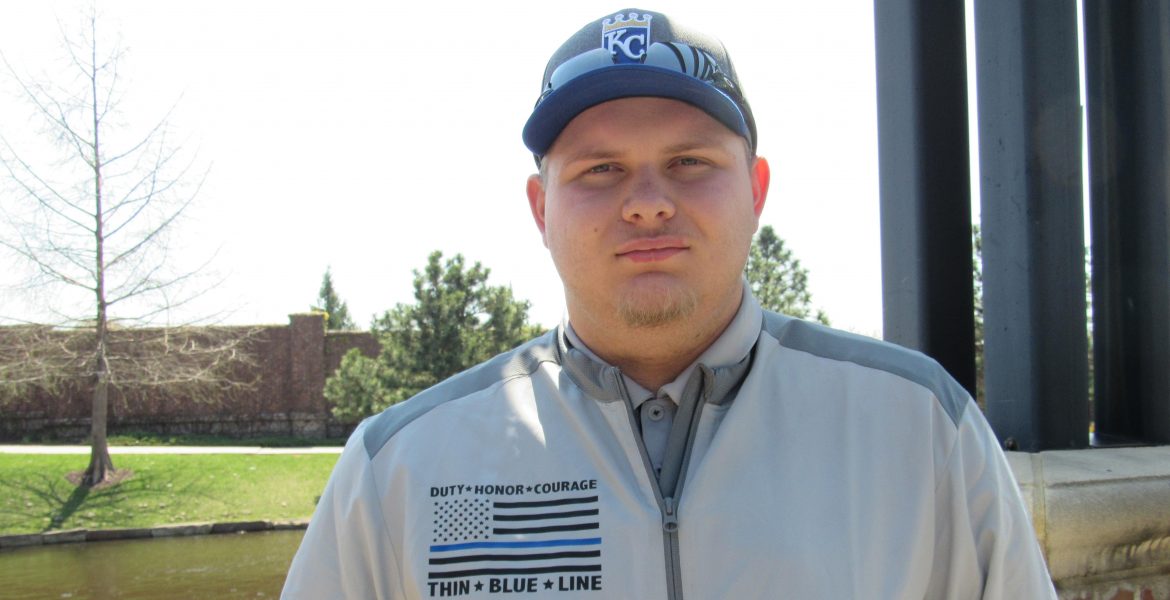 Less than two years ago, about 30 police officers showed up to seek out Michael Pasco at Wichita’s Southeast High School.

They were there to thank the teenager for his efforts to bring a nationwide movement to Wichita that is designed to help improve trust and build relationships between citizens and law enforcement.

Pasco was only 17 when he started Coffee with a Cop in Wichita in November 2015. The program originated in California in 2011 when a local police department asked residents to join them for a cup of coffee and conversation to help ease tensions. Pasco initially heard about the program when he saw the sheriff in Laurens County, South Carolina, where Pasco was born and still has family ties, hosted such an event. He reached out to the sheriff’s department to learn more and started the event in Wichita.

“I’ve always been supportive of law enforcement,” said Pasco, whose attire on the day he was interviewed clearly showed that.

Both his gray shirt and jacket bore what has become the emblem of a pro-police movement: a white, black and blue variation of the American flag, with a single blue line in the middle of the flag. The words duty, honor, courage were above the flag, while the words thin blue line were below. On Pasco’s wrist was a braided bracelet with a blue line woven between two black borders and a bracelet commemorating last year’s law enforcement parade in Wichita. A police challenge coin has been in his wallet for so long it’s left an indentation. His Kansas City Royals hat was a tribute to his love of baseball.

About 10 people showed up for the first Coffee with a Cop event Pasco organized in November 2015. Last June, 300 showed up, Pasco noted proudly. That event also featured the U.S. Honor Flag, a flag that flew during recovery efforts at Ground Zero, was on the last space shuttle flight and has been all over the country to honor police officers, firefighters and soldiers. It was Pasco who had worked to invite Honor Flag staff to bring the special flag to Wichita.

“I do it to fill in the gap between the community and the officers so they can talk one on one,” Pasco said, of Coffee with a Cop. “We’re there to help make the community a better place.”

He also does it because he cares.

Recently, Pasco took a week of vacation from his full-time job as a customer service representative with Dick’s Sporting Goods so that he could help work on the law enforcement parade and community block party that was held in Wichita April 8. He once again brought the U.S. Honor Flag to Wichita to be a part of that celebration. The very next day, Pasco drove to Colorado to visit Wichita police Officer Brian Arterburn, who is undergoing rehabilitation for extensive injuries he received in the line of duty.

“Michael has a passion to see that all first responders are shown that their lives matter,” said one of several individuals who nominated Pasco for the Quiet Hero award. “Michael is young but he knows what it takes to make a difference in the community.”

He’s also shown leadership in other endeavors to benefit law enforcement. He helps with fundraising efforts for the local Fraternal Order of Police lodge, Pasco said, and also with a new run honoring fallen officers. The 2nd Annual Officers Down 5K run and community event happens May 21 in Wichita.

His efforts are noticed by others – like the cops who came to his school that day and the City Council members and others who reach out to him to encourage those efforts.

“I wake up to messages every day,” Pasco said.

Only 19, Pasco hasn’t ruled out that one day he may also be in law enforcement. He would like a career where he could combine both law enforcement and paramedic roles, he said.

In the meantime, Pasco will continue to pour on the support for Wichita’s area law enforcement members by continuing the Coffee with a Cop and other events that promote first responders.