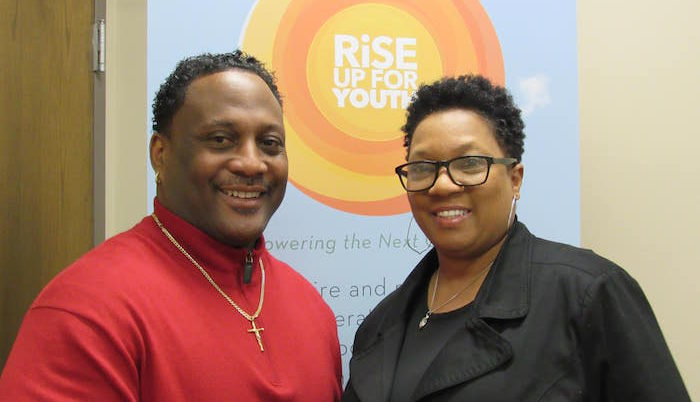 David and Lynn Gilkey say they would rather build strong youth than restore broken adults. That’s why the husband-wife team founded the nonprofit Rise Up For Youth in 2014 after many years of working with young girls and boys.

Through in-school mentoring at five Wichita high schools, workshops, team-building and other activities, Rise Up For Youth has worked with about 250 kids annually to help them avoid gangs,do better academically and make better life choices. Rise Up For Youth includes five other staff members.

Funded by grants from organizations such as the Downing and Koch foundations, United Way, USD 259 and private donors, the organization’s goal is to be in all nine Wichita public high schools by 2020.

“We have a waiting list and have been asked to extend the program to middle schools,” said David.

The Gilkeys know from firsthand experience the effort it takes to restore broken adult lives. Less than 20 years ago, they were cocaine addicts facing prison sentences, Substance-free for 18 years, they’d rather help youth get the tools to make better choices now. Rise Up for Youth’s mission is “to inspire and motivate the next generation to unlock their full potential through education, mentoring and empowerment.”

They want kids to be productive citizens, not homicide victims or inmates, they said.

All of the kids in the program who have made it to their senior year in high school have graduated and enrolled in post-secondary education. More than three-fourths have maintained a 2.0 GPA or higher. The kids come from different racial groups, and many have these things in common: a single parent with no college degree and a low-income household.

The Gilkeys say they don’t sugarcoat what their own wrong choices led to. In addition to taking students on tours to colleges in places like Chicago, Kentucky and Dallas, they also take them on prison tours – a move that one of the organization’s board members calls “from college halls to prison walls.”

They realize that despite their best efforts some may not see their full potential, but they still remain firm in their mission. In the time they’ve been mentoring youth – David since 2005 and Lynn since 2008 – they’ve lost 13 boys and one girl to violence.

“All it takes is one wrong decision to cost you your life or your freedom,” David said.

To find out more, visit riseupforyouth.org.