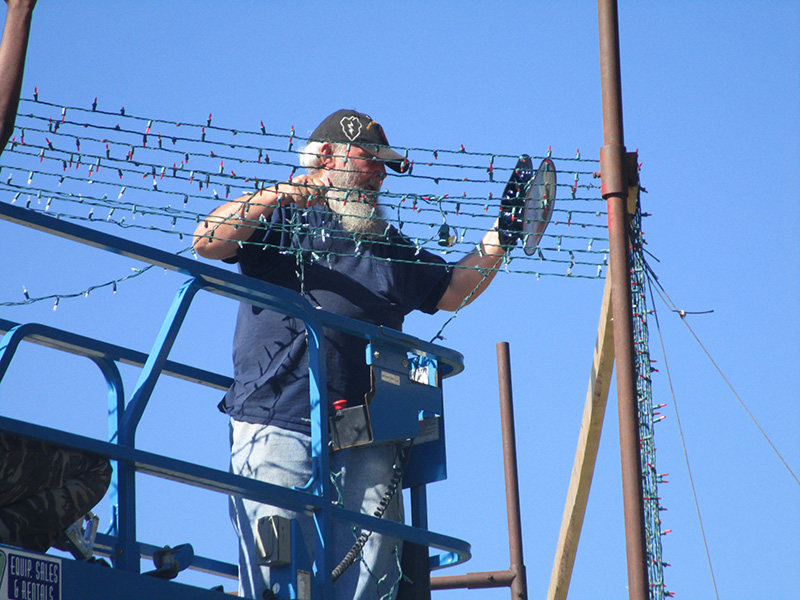 For the past 15 years, retiree Larry Hanafin has been helping the lights shine bright for one of the Wichita area’s most popular holiday displays.

Now the volunteers and staff of The Arc of Sedgwick County want to shine the light on Hanafin’s efforts as a volunteer for the nonprofit organization that offers various programming to make a difference in the lives of individuals and families living with intellectual and development disabilities.

The Arc’s Lights holiday display features 1.4 million lights and 20-plus miles of electrical and extension cords, enough to go from Wichita to Newton, according to The Arc officials. The most recent display – starting at the intersection of Douglas and St. Paul in west Wichita and continuing through the grounds of The Art and the adjacent Independent Living Resource Center – was open nightly from Nov. 23 through Dec. 28. The light display, held for the past 21 years, is the premier fundraising event for The Arc.

Volunteers such as Hanafin start work in September on the display by testing the lights to see if they work. Then the displays are assembled. In January, the display is disassembled, an effort Hanafin also participates in.

“I’m the high man,” said Hanafin. “I do all the displays that need a lift.” His signature creation is a tunnel of lights.

“He loves to give of his time for people who need it,” added Mike Kelly, program director.

The Arc has become his saving grace, the 69-year-old Hanafin said, a place for the former Vietnam War veteran of the 25th Infantry Division to be part of something positive and rewarding.

He started volunteering about 15 years ago, when one of his daughters, who was working for one of The Arc’s programs at the time, told him that organization needed help setting up its holiday display. She thought it would be an ideal place for him to share his skills – and his giving nature. After his 18-month stint in the Army, Hanafin had spent decades working in maintenance, including 25 years at the Boeing-Wichita plant. One of his major hobbies is collecting and restoring vintage cars.

The 1945 Dodge pickup he drove back and forth going to high school in Valley Center and the car in which he learned to drive are among his car collection.

Seeing an Arc client’s face light up when he plays Santa or helping someone make memories of a lifetime during an out-of-town trip are particularly special for Hanafin.

“I just love helping people and I always get back tenfold what I give.”