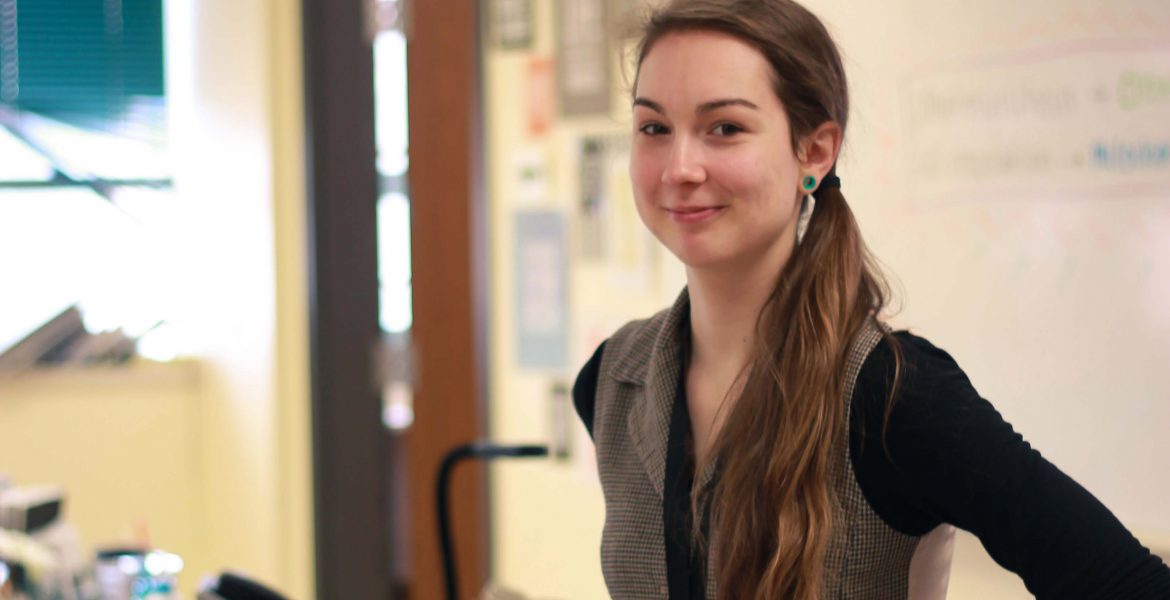 For the past few years, Marcillene Dover has spoken out to Kansas legislators, county commissioners, professional groups and many others about the importance of providing healthcare to people in need. Specifically, Dover is an advocate for expanding the Kansas Medicaid program KanCare to those who fall into the “KanCare Gap” – working people who earn too much to qualify for Medicaid, and too little to qualify for federal subsidies to buy private coverage.

“People talk about it like KanCare is a ‘handout,’ that people who need it are ‘welfare queens’ and should just work harder,” Dover said. “But there are ordinary people with jobs and families, students and others who work but can’t afford insurance. It’s not a handout. Everyone deserves health care.”

After graduating from North High School as the 2012 class valedictorian, Dover enrolled at Wichita State University. To support herself through college, she worked full time in a mall candy store, and at times an additional one or even two part-time jobs. In 2013, she began to notice that her legs felt “different.” She went to a clinic, where she was told she needed an MRI for an accurate diagnosis. Despite working up to three jobs, Dover did not make enough to afford insurance, let alone an MRI. The clinician prescribed six weeks of physical therapy. Dover’s mother paid for the therapy, but by the end of it Dover felt no better.

By late summer in 2014, Dover was having difficulty walking. At that time, she was working at a shoe store and as a tutor at North High. Then she began slurring her words. She saw a doctor on campus, who referred her to a neurologist. Dover had to save up for three months to get the $300 needed to see the specialist. When she did, the doctor suspected multiple sclerosis. He too recommended an MRI.

Dover applied for help through the Affordable Care Act, but didn’t qualify for a tax credit. Through the help of a faculty member at North, Dover did, however, connect with Project Access, a Wichita nonprofit that provides help to people who have serious health issues but can’t afford insurance.

Project Access works with other agencies, as well as physicians and other medical professionals who donate their time and services. A neurologist, Gautham Reddy, M.D., was assigned to Dover’s case. With his help, the Multiple Sclerosis Association paid for the diagnostic MRI.

Within days, Dover got a call. It was clearly MS.

“I just panicked,” Dover said when she received the news. “I knew this was something big that will affect the rest of my life. I also knew it would be expensive.”

In addition to needing a neurologist, Dover needed high-cost, specialized drugs. Fortunately, Dr. Reddy donated his services, and through Project Access she qualified for a medication assistance program.

In December 2014 she began taking a disease modifying therapy drug, which she administers by self-injection three times a week. The drug soon gave Dover relief.

“Before taking the drug there were days I could barely make it from my car to class,” Dover said, adding that on some occasions she had to ask strangers for help. “It was a tremendous source of stress, in addition to the pressure of school, grades and money.”

Because of her experience, Dover developed an interest in the issue of KanCare expansion, which could benefit the 150,000 individuals in the state without health insurance. In early 2015, she was asked by the National Multiple Sclerosis Society to testify before a committee in the Kansas Legislature considering a KanCare expansion bill. Despite her compelling testimony, and that of more than 150 health care providers, religious leaders, and representatives of businesses, organizations and the Kansas Hospital Association, the committee chair never called a vote on the bill, effectively killing it.

Dover also testified before the Sedgwick County Commission in 2015, when the commission considered cutting support for a number of health-related programs, including Project Access. The agency survived, although funding dropped from $250,000 per year to $160,000.

Dover has met with other state legislators over the past two years to make the case for KanCare expansion, and spoken at events staged by the MS Society and the Via Christi Health Life Matters program. She has been featured in stories by The Wichita Eagle, KSN News, KMUW News, KFDI Radio and other media. In September, Dover received the 2016 Kansas Hospital Association’s Distinguished Health Care Advocate of the Year Award.

Dover said she speaks for KanCare expansion because the MS Society, Project Access, Dr. Reddy and many others have done so much for her.

“I just felt like I owed it to the programs and people who helped me,” she said. “There are many people who fall in the gap and can’t get the care they need. I want to tell my story for others who can’t tell their stories.”