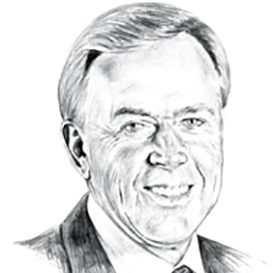 A new program that honors people and businesses making a positive difference in Wichita is naming its community leadership award for longtime aviation advocate, philanthropist and community leader Russ Meyer.

The program, called “Difference Makers for Wichita Awards,” was created to celebrate people and organizations whose contributions and positive influence are improving the greater Wichita community.

“We are extremely pleased that Russ has lent his name and stature to the Difference Makers community leadership award,” said J.V. Johnston, vice president for university advancement at Newman University, which is co-sponsoring the program with Cook’s Heating and Cooling and The Wichita Eagle.

“Russ is a very humble man. He first said ‘no’ to our request to have a Difference Maker award named after him,” said Roy Heatherly, president and publisher of The Eagle and Kansas.com. “But his imprint on Wichita’s working poor is undeniable. He has quietly led many campaigns for GraceMed Health Clinics, The Boys and Girls Club and many others.”

Meyer created Cessna’s 21st Street Training Program, a comprehensive program for Wichita’s inner-city residents that became a national model for jobs training, and the Citation Special Olympics Airlift, where hundreds of Cessna Citation owners transport athletes to the national games. Meyer and his wife Helen have led and donated to many causes in Wichita supporting children, education and the arts. Among other projects, Meyer spearheaded the development of the 42,000-square-foot complex for the Boys and Girls Club of South Central Kansas. He led campaigns in support of several GraceMed Health Clinics including the newest one near the South Wichita YMCA.

Meyer was Chairman and CEO of Cessna from 1975 to 2003. Under his leadership, Cessna designed and built more business jets than any other manufacturer in the world. Meyer was also instrumental in the passage of the General Aviation Revitalization Act in 1994, which cleared the way for increased aircraft production in Wichita.

The Russ Meyer Award for Community Leadership will be awarded annually to “an individual who is making a positive impact in our community through demonstrated excellence in leadership and outstanding initiative to create solutions for critical issues facing the Greater Wichita Area.” The Meyer award is one of five that will be bestowed each year by Difference Makers for Wichita:

In addition, four nominees will be selected for monthly “Quiet Hero” awards, which are given to those who do not seek recognition but have an unwavering commitment to the service of others. Winners in the five categories and the four “Quiet Heroes” will be recognized at a Feb. 25, 2017 banquet at Newman University.